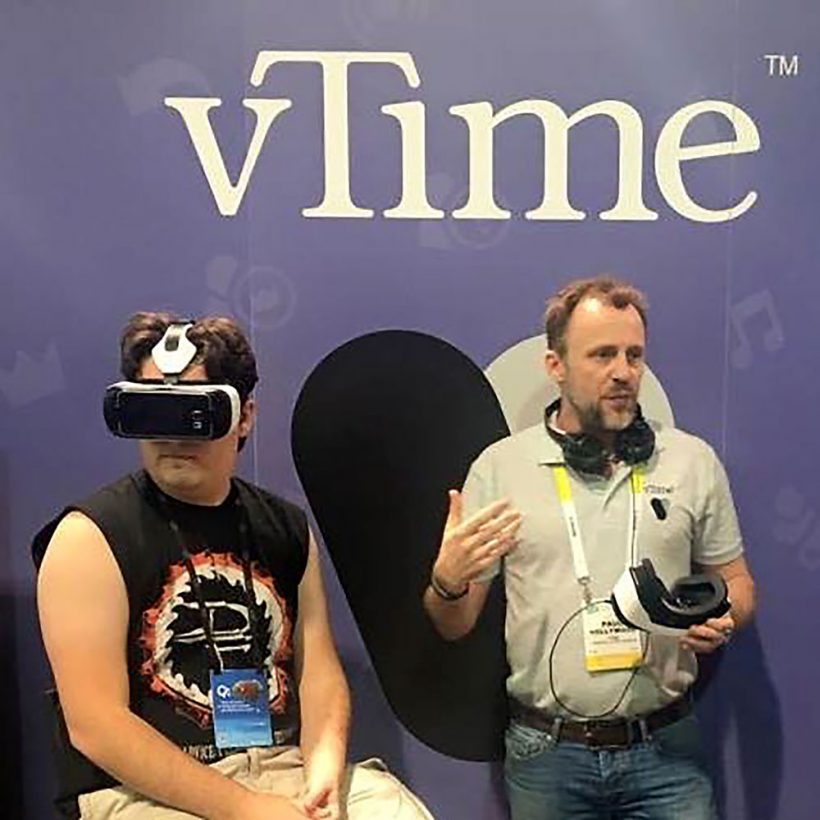 The final day of the show arrived. And so did our special guest.

Following the regulation middle of the night breakfast, we made our way to to coach for our journey to the exhibition halls. On previous days the coach has been full, but today we were the sole occupants. That didn’t bode well for the new CES Saturday introduced this year.

At the hall, as the doors opened, it was a similar story – crowds, what crowds? But, after an hour or so it did pick up and the demo monkeys leapt (well, more croaked) into action.

We were doing a slow but steady trade when Palmer Luckey, founder and the driving force behind Oculus appeared at our stand for a quick vTime session.

I mentioned the other day we were expecting a VIP guest on our stand and, sure enough, he eventually turned up. He was a day late but, then again, in the VR industry being late on your promised dates is OK, isn’t it?

What did he think of it? Well, I wouldn’t be telling you about him if he hated it, would I?

Other than that we had a steady flow of other exhibitors (at last they found time to leave their own stands), VCs and content holders. We also found some time to “walk the floor” and had some very interesting conversations with potential partners.

One, in particular, is worthy of note.

Our Glorious Leader went for an invitation only, top secret, hush hush demo of some new AR tech behind securely closed doors.

What occurred was certainly memorable. He was handed to try one piece of this new piece of tech (of only two in the world) which had been made specially, at great expense, to demonstrate at the show.

And he broke it.

Not just a little bit. He actually snapped it in half. Good job there was only an hour of the show left to go!

But, just to demonstrate how charismatic our Glorious Leader is, they still want us to become one of only a few selected developers for this exciting new device. Amazing.

As 4 o’clock and final closing approached we took down the stand, packed up our demo kit and labeled up all the stuff we were leaving for charitable donation. It’s a great scheme they run at CES which means anything we don’t want to take away they will donate to good causes. And, as it was cheaper for us to buy most things like the TV than to rent them for the week, the charities involved will be getting quite a few hardly used goodies courtesy of Starship.

Stand in hand (well, on wheels, actually) we bade farewell to CES 2016.

What a show it was. Our first with vTime but certainly not our last. The reception vTime received was overwhelming and the interest in vTime (and Starship) is almost unbelievable. We are now in no doubt that our next 12 months will be frantic, fantastic and life changing.

In fact, we now see such a huge year for us ahead, that at next year’s CES some other new company may well feature a photo of our Glorious Leader on their stand, as the highlight of their day.

Providing they don’t let him touch anything, that is.